Today, the New Orleans City Council’s Budget Committee met to consider the ordinances proposed for the Office of Police Secondary Employment.  The ordinances considered today set the pay scale for officers and established an enterprise fund through which those payments will be made.  These are the ordinances that have been available for quite some time.

Councilmember Cynthia Hedge-Morrell (co-authored by Councilmember Stacy Head) offered a number of amendments to these ordinances.  A gist of the amendments were as follows: 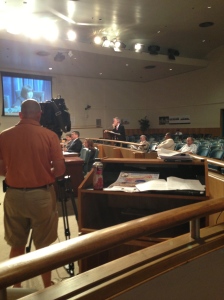 The ordinances, along with the amendments will be considered at the next regularly scheduled City Council Meeting, July 11, 2013.  There the proposed ordinances will be voted on by the entire City Council.

Video of today’s meeting can be seen here.  Choose #11 on the agenda.