In Part 1, we took a quick look at the Supreme Court’s ruling in Graham v. Connor, the case which sets the legal standard for judging the use of force by law enforcement officers.  In this part I am going to discuss reporting the Use of Force.

Hand control or escort techniques applied for the purpose of handcuffing or escorts that are not used as pressure point compliance techniques, do not result in injury or complaint of injury, and are not used to overcome resistance, are not reportable uses of force.

END_OF_DOCUMENT_TOKEN_TO_BE_REPLACED

Click below to read recent decisions from the Civil Service Commission for the City of New Orleans on FOP cases:

On Thursday, August 8, 2013, the New Orleans City Council considered the proposed OPSE ordinance, yet again.  The ordinance considered today was an amended version of the ordinance.

On Wednesday, August 7, 2013 the DOJ send a letter to the City Attorney’s office complaining that some of the amendments to the proposed ordinance would be contrary to the provisions of the Consent Decree.  The DOJ Letter can be found by clicking here.

As a result of the DOJ letter, the City Attorney’s office advised the City Council that if they didn’t pass this ordinance and adjust it to comply with the Consent Decree that either the City would be held in contempt of the Consent Decree or that Judge Morgan would not allow any paid details at all. 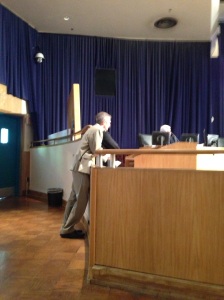 The City Council met in Executive Session for about two hours while they discussed how they were going to handle the ordinance in relation to the DOJ letter.  Once they came out of Executive Session, Stacy Head offered the following amendments:  Section b(6) was to be deleted in its entirety and the words “or rotation requirement” were to be deleted in Section b(9).  These two amendments passed 6-0.  Cynthia Hedge-Morrell did not vote.

Susan Guidry then offered an additional amendment that deleted section b(8) in its entirety.  Ms. Guidry’s amendment passed with a vote of 5-1 (Head voted AGAINST).

The entire, amended ordinance was then offered and voted on by the entire City Council and it passed with a vote of 5-2 (Head and Hedge-Morrell voted AGAINST).

The final version of the ordinance looked something like this.

Myself and Raymond Burkart, III were present the entire day and worked tirelessly to try to get the best possible outcome for FOP members.  Raymond gave an impassioned plea to the City Council, but by then they had already decided what action they were going to take.  The video can be found here.

Raymond Burkart, III argues on behalf of the FOP.

The entire City Council insisted that it was their intention to further examine the issues raised in the letter from DOJ and revisit the ordinance accordingly.  It should be noted that Cynthia Hedge-Morrell, who was responsible for most of the amendments to the ordinance, did not vote out of protest and because of an ethics complaint leaked to the media.  It should also be noted that Stacy Head was steadfast in her opposition to today’s second amendment and the ordinance as a whole.  It is worth watching the entire video.

What does all this mean?

The ordinance defined “Major Special Events” to include events held at the Convention Center, Fair Grounds, Mahalia Jackson, New Orleans Arena, Saenger, Superdome, and Lakefront Arena with an expected attendance of at least 2,000 people.  Major Special Events are exempted from the rotation requirement.

The rates were set.  They can be found on this document.  The $17/hr premium will be added to the amounts on this chart.  The OPSE fee will not change.

Any fees collected by the OPSE which are not spent on the administration of the OPSE will be returned to the officers who worked details in an amount proportional to the amount of detail hours worked.

There can be special rates of pay for details requiring special certifications.  For example, K-9 handlers, bomb techs, and divers may command a detail rate commensurate with their level of training.

Officers can agree to work a detail for an amount lower than the pay scale for pre-existing details.  For example, if you currently work a detail for Mom and Pop Restaurant for $20/hr., you can continue to do that if you wish.

The amendments that were deleted today are lined out on this document.  In effect, the amendments were to remove options for the City Council to waive the rotation requirement and protections for the special taxing districts.  This does not necessarily mean that Lakeview and Mid City will fall under the OPSE, but it does exist as a possibility.  We will be staying on top of this issue to try to get that amendment protecting the special taxing districts reintroduced.

You may have some questions after reading this.  You are welcome to ask.  I don’t know if we will have an answer yet, but if we do, we will share it.  There are plenty of things that remain to be seen with this OPSE plan.  We will keep you updated as much as possible.